The weekend at the cabin ended very well in my opinion. Michael skied a half day, came back to the cabin and we strapped on some new skis to Calliope and played in the snow for a while before heading down the hill back to home. It was a perfect ending to a frustrating weekend. I won’t even begin to tell you about the fight Calliope put up on Saturday night putting her to bed. Whew! Anyways, I had a big meeting in Guerneville on Monday that I needed to be thinking about. I already have had (too) many conversations with Michael to make sure he was ok watching Calliope all day even though he was meant to be working. He made it clear that it just meant he would have to make it up in the early mornings or in the evenings this week. And I told him it was not going to be a regular occurrence, we just haven’t secured a babysitter in the area, or daycare etc… which I have almost nailed down. He reminded me that if I asked again next week, the answer would be no. Ok already, fine. I’ll figure it out, just don’t yell at me if you don’t like the way I figure it out! Hahahaha… cracking myself up… Besides, I was getting a day off. For those of you who have yet to be a parent, or those parents who work a regular job, you know not what I speak of… Everyday, I clean, cook and take care of a little one. That is my real job, period. I don’t often get breaks from it and it can wear on ya just a bit sometimes. Even vacations are a lot of the same thing. I still have to be constantly on alert, watchful, loving, teaching, correcting, saving my child from sure death. And while I would never trade it, change it or give it up, I still have bad days, just like anyone else at their regular day job. I’m sure this has been said before, but it sounds revolutionary to me. I’ve never heard anyone say it before. Moving on. So, a meeting at La Boulange with a client over a bowl of mocha (yes, a bowl!) flipping through pictures on my iPad and him on his mini iPad, a drive to Guerneville to meet with a contractor to review a door and window schedule for a proposed house, a drive over the Golden Gate Bridge to San Francisco to meet with more clients to deliver beautiful furniture, and a nice meal in between at Super Duper with a pint of beer sounds like a lovely day off from being a parent. I suppose it wasn’t all that much fun. I did have to prepare like crazy for that meeting at La Boulange, and if you think builders actually like cute gay little interior designers “helping” them make decisions about a house they are building, then wow. It can be near impossible for them to take anything you say seriously, so my job becomes far more complicated (the interior designer side job). Not only do I have to provide my client with sound advice on the aesthetic decisions, I have to make nice (kiss ass) royally to someone who doesn’t want to be any where near a faggot and convince him thoroughly that I am not out to screw him (financially or otherwise) with my sway over the client and that I actually have done this before a few million times and know what I’m doing. Its rather nerve racking to be honest. Not all builders fit this description, and this one I met on Monday in particular was not bad. Especially once he realized that I was just trying to keep some focus on the objectives of the day and get decisions made, because he can’t do diddly until these decisions get made. And decisions we made, left and right. It was a good meeting, a success on all fronts. Then as I had some time between my unhealthy, but very satisfying meal, and my next meeting, I decided to cruise Market street with no real destination in mind. That is when I found this most delightful object, a small mushroom stool. Just the perfect size for Miss Calliope. I had to get it and so I did. Bought it right on the spot and carried it some four or five blocks back to my parking spot, ever so proud to be in the city carrying a large mushroom down the street. 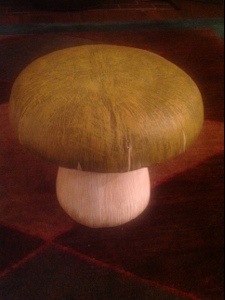 I finished my day off with a brilliant meeting that went longer than expected but yielded some unexpected, successful results. And because it was so late, I got home across the Bay Bridge in record time. I love the lack of traffic. I don’t loathe heavy traffic, its when I get some good thinking done. But its great when you can just fly all the way home. The only thing holding back my ecstatic mood was me. I felt really bad that Michael had to take care of Calliope all day while I gallavanted around. I just couldn’t let myself enjoy the day, a day that I deserve and planned and negotiated. And to make it worse, Michael had not yet recovered fully from his upsetting bedtime with Calliope (anyone see a pattern here?) when I rolled in. However, in full glory, I told him how much I appreciated him covering for me today. That despite my gorgeously successful day, I felt guilty and not so good about it all. And well, being the angel that he is, he set me straight, reminded me that he loves me, that while it wasn’t an ideal way to handle our situation, it was our best solution at the moment and that we work together as a team to get through life and that was what we did today. It turns out he had a wonderful day with his daughter, a really good day despite the bedtime shenanigans. And that makes me happy.