Just enjoying some oysters and pomme frites together.

It’s official:  Mikey and I finally getting married.  It only took us 13 years, a daughter, a dog, a cat, a remodel, a house sale, a house purchase, countless job changes among other things to finally realize we are right for each other.  🙂
The date is set of Saturday June 28 which also happens to be our 13th anniversary and also Gay Pride Saturday in the San Francisco area.
All the details can be found here: http://wedding.lasmanis.com/ 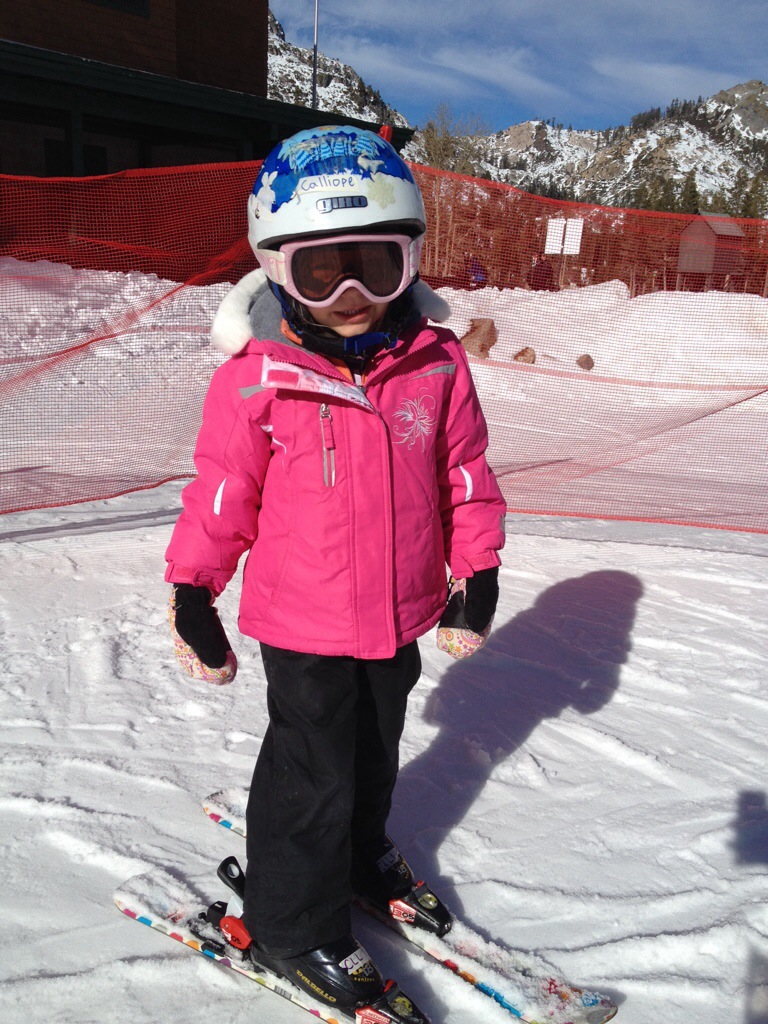 Feels weird to have strapped on skis for the first time in 20 years. 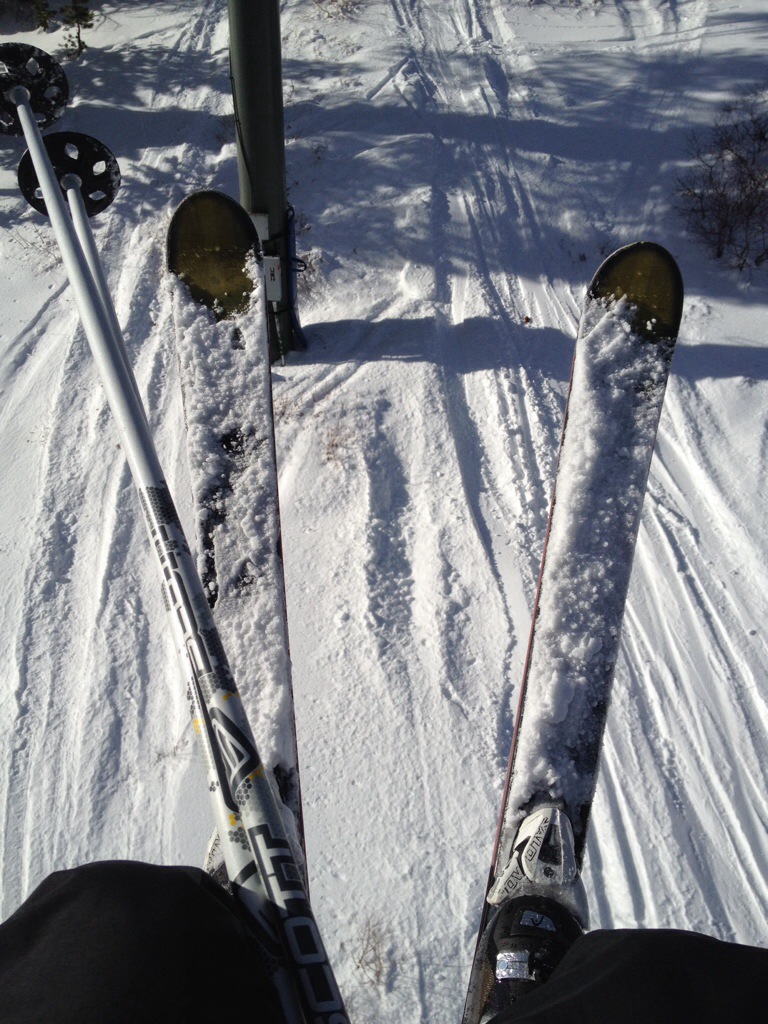 We got a call on Tuesday night that MaMa has passed away. We are forlorn. She was amazing and her connection with Calliope was awesome in the true sense of the word. I often think of it this way: As MaMa got older, and Calliope got older, they came to the same place in the mind that was extremely simple. They played together like two toddlers. Spurts and fits of activity with lots of hugs and animal noises. We are extremely grateful in our hearts that she is in a better place and that her suffering was not great. She will be sorely missed. And I can only hope that Calliope will remember her in her later years as I know that I remember very little from the age of three. And I hope she left me that mink coat that she liked to wear so much.

Discipline. I don’t have a lot of it. Its the reason I have never been able to work out for longer than three weeks at a time with any consistency. Well, that and the fact that gyms make me extremely uncomfortable due to my own vanity. That and the fact that I am petrified some straight guy will see me stealing a glance at their perfectly shaped …. fill in the blank, I’m sure whatever you put in that spot will work just fine. Its not that I stare, but I’m male and like most males, gay or straight, I like to look. And it can be dangerous for little ol me… so I just don’t put myself in that position. Moving on… Michael has loads of discipline. When he puts his mind to it, he can start running on any given day, even if its been a year and half since he last ran. Then he is solid for years at a time. Its why he was able to participate in five (i think maybe six) Aids Rides from SF to LA. Wow, that is truly amazing. And I have no idea where he gets it from. I admire and envy it all in one fell swoop. I wonder if it has anything to do with his parents and how he was raised. Or even better yet, did they decide from the beginning to instill discipline into his core being? How do you do that? I would replicate it if I could. Sure, everyone needs love and support as a child from their parents growing up, but if you can instill discipline, you are doing them a great service. In this world today, its one of the things that will keep you going. And it makes me wonder if private schools with their uniforms and strict ways has this affect on kids. Dear Calliope, please learn discipline from your Dad. Thank you very much. Sincerely, Daddy.
Having said that, I do have my own way about the world which works. I don’t think it works so well as Michael’s discipline, but my hairbrained emotionally charged way of doing things works pretty well for me. I’ve done alright. I can’t complain. I just wished it were a smoother ride sometimes. Michael seems so calm and steady. From over here inside my head, it looks so lovely.
But when I have to and really put my mind to it, I can do just about anything too. What brings this line of thought? A desire to be healthier in my ways, to take care of myself. Exercise, regularly. Eat better. So that I feel better and can better take care of Calliope… and Michael too when necessary 🙂 Yes, sometimes he needs me to take care of him, in whatever way that might be.
This is me embarking on a new journey, a new way of thinking. Its about embracing a deeper love of myself. Realizing I’m not getting any younger. Knowing that only I can change my habits. You could even view it as a sort of new year resolution. This is all a bit heady me thinks. Just wish me luck as I hopefully start working out soon, exercising more and eating better 🙂 Send me some discipline!!!

Many times I have wanted to braid Calliope’s hair. Usually, she doesn’t sit still long enough for this to happen. But the other day I was exuding patience and made my first real attempt at a french braid. I already posted this on facebook, but I wanted to capture it again here. I can’t help feeling so proud. I’ve done a pony tail with a plain braid before, but never have I done a french braid on her or anyone else. I used to braid my little sister’s hair all the time when we were wee little ones, but again, not french braid. Here are a couple of pictures. It stayed in for a couple hours without getting too messy… 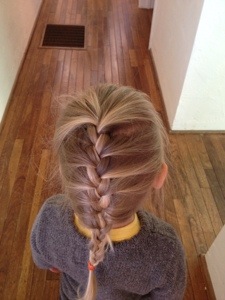 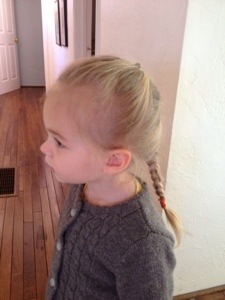 Yes, I know Calliope hasn’t been a baby in ages, but it hit me like a ton of bricks about a week ago. Michael was out of town on business and I had a bad movie night and some wine after Calliope went to bed. Just as I was heading to bed and setting up the baby monitor next to the bed, I realized she looked a bit funny in the monitor. She had her butt in the air and was not covered up at all. I had a parental moment of pure love and thought I should go and cover her up so that she was warm. I quietly slipped into her room and upon seeing her, realized there was no way she was comfortable in that position. I thought maybe if I just picked her up quickly and laid her back down, that would be easy and the right thing to do. Unfortunately, she is not a baby anymore and the quick readjustment I had imagined in my head turned into quite the ordeal. No screaming or crying, but I did wake her more than I intended because she was just too big to maneuver so easily. I did succeed, got her laid down on her back and covered up. She was back asleep by the time I was back in my room. But the realization that she is just that much bigger made me sit there for a moment in bed pondering infinity…